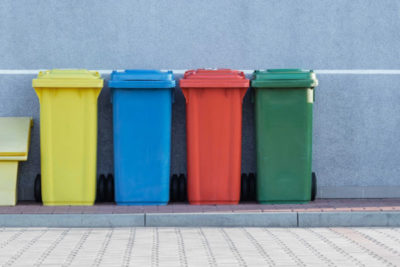 Despite a growing concern over environmental conditions, universal steps across the United States have not been taken to require companies to recover and recycle resources from the massive amount of waste generated on a daily basis. However, there are states that have taken on companies at the local level and started to institute stricter and more robust laws relative to recycling and the use of non-sustainable materials in our day to day lives. At the citizen level, you see bottle bill’s, container deposit laws, plastic bag bans, and mandatory recycling requirements. There are even landfill bans of recyclable materials in states such as Wisconsin, Minnesota, and North Carolina. Approximately 25 states have instituted some level of electronics recycling requirements. In the absence of national legislation imposing any sort of recycling measures on businesses, local legislatures in a number of states have set their sights on imposing strict mandatory recycling requirements on companies doing business within their borders. Let’s explore some of the existing legislation

California set down the path of creating one of the most comprehensive recycling programs in 2008, with the Statewide Waste Characterization data report showing that almost 75% of California’s solid waste was generated by the commercial sector. It was decided at the time that aggressive recycling initiatives would be required in order to reduce greenhouse gas emissions from landfills – in order to achieve the targeted greenhouse gas reductions, it was necessary for commercial entities to recycle an additional 2 million to 3 million tons of materials annually by 2020. The initiative stated that recycling had to continue at that level beyond 2020 in order to sustain the progress that would be achieved.

In 2012, AB 341 was signed into law, putting into effect mandatory commercial recycling regulations. The bill was later amended to specify that all businesses generating 4 cubic yards or more of commercial solid waste must secure third party recycling services. The initiative was designed to educate, force outreach, and create oversight of businesses operating in California.

All businesses in New York City must now provide a way for refuse to be sorted and disposed of, and to the best of their ability ensure recyclable materials are handled by a private waste management vendor. The primary takeaway of New York’s law is that under no circumstances should normal garbage share a bin with recyclable materials, and companies must post the method by which recycling is gathered and removed. The law goes so far as to require any company that wishes to handle its own waste without the assistance of a third party carter company to register with the city.

Other Laws From Across the Nation

Seattle has proposed recently legislation to require commercial entities to add glass, aluminum, tin, and plastic to existing paper and cardboard recycling requirements. The state of Minnesota several years ago passed laws requiring retailers, wholesalers, service companies, and other industries located in metropolitan Minneapolis that maintained garbage bins of 4 cubic yards or larger to recycle at least three items. Items could include aluminum, cardboard, plastic, steel, or other recoverable items. In one case, a company figured out how to properly recycle styrofoam, saving the company $2500 a month in waste hauling fees alone. Gainesville in Florida requires a separation and recycling of materials similar to that in place in Seattle, and requires certain items to be recycled if they comprise 15% or more of a company’s waste stream.

Partner With 1 Green Planet and Do More for the Environment

The EPA estimates that 75% of the waste generated by Americans is recyclable, but we only recycle at most 30% of that waste stream. Working with advocacy groups at the local level and the national level – with organizations such as the National Waste & Recycling Association – is vital in order to push legislation that requires more companies across the United States to conduct business in more sustainable ways and ensure the waste that they do create is managed properly.

Here in Washington state, there is a push for a sustainable recycling bill to address the contamination in the state’s recycling stream that limits what recyclables can be exported. Here at 1 Green Planet, our solution is simple. We provide 100% local recycling services with 0% landfill and 0% export of materials to offshore operations. We make it easy for commercial entities to safely and effectively handle recyclable waste – including e-waste. We can even arrange to pick up as needed. All you have to do is contact our team of professionals and we’ll work together to ensure your organization is acting in the best interests of the environment.